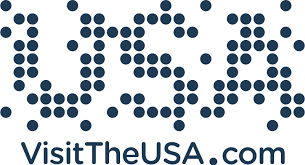 1. The Grand Prismatic Spring
The Grand Prismatic Spring in Wyoming’s Yellowstone National Park is not only the largest hot spring in the USA, but also one of the country’s most colourful natural wonders. The colouring is as vivid as pictured, with the unexpected reds, yellows and oranges caused by bacteria that thrive on the mineral-rich waters. For a bird’s-eye view of the pool, take a helicopter ride or put on your hiking shoes and climbthe Fairy Falls Trail.

2. The New York City Skyline
New York City, New York’s skyline is one of the most iconic in the world. Part of what makes the skyline so spectacular is the lofty number of skyscrapers that comprise it. Since 1890, 11 structures in New York have held the title of the world’s tallest building. Many tourists journey to the top of the Empire State Building for panoramic views, but a quick trip over the East River to Brooklyn Bridge Park offers a less chaotic and more scenic experience. Brooklyn Bridge Park also features several sports fields and plenty of places to enjoy a relaxing picnic.

3. The Grand Canyon
Not even the highest definition photographs can truly capture the power and majesty of the Grand Canyon in northern Arizona. The Colorado River and its tributaries have been slowly carved the 446 kilometre -long and up to 29 kilometre-wide canyon for 6 million years, creating stunning panoramas. Grand Canyon National Park is about a four-hour drive from Las Vegas, Nevada, and a three-and-a- half-hour drive from Phoenix, Arizona. Most of the nearly 5,000 square kilometre park is maintained as wilderness and beautiful views can be found all over.

4. Hawaii Volcanoes National Park
Hawaii Volcanoes National Park is the perfect place to see Mother Nature in action. The park, located on the southeast coast of Hawaii’s Big Island, is a hotbed of steam vents, craters, calderas, lava tubes and two active volcanoes. Manua Loa is the world’s largest volcano, and both Kilauea and Manua Loa are among the most active volcanoes in the world. Take a night drive through the park and you can see the red-orange glow of hot lava oozing out of the earth.

5. Gateway Arch
Missouri’s Gateway Arch is a striking piece of minimalist architecture. Stretching across the skyline of St. Louis, the center-piece of Jefferson National Expansion Memorial makes the city instantly recognisable in photographs. The 192-meter-tall arch was built to commemorate President Thomas Jefferson, who bought the Louisiana Territory and made possible westward expansion in the USA. You can ride a tram to the top of the stainless steel structure to the top, where you can see up to 30 miles in either direction, giving bird’s-eye views of the city’s downtown and the Mississippi and Missouri rivers.

6. Oak Alley Plantation
Oak Alley Plantation in Vacherie, Louisiana, is great place to slow down and take in some Southern charm. A one-hour drive from New Orleans and a stone’s throw from the Mississippi River, the old mansion harkens back to a bygone era reminiscent of the film, Gone With the Wind. Valcour Aime, known as the “Louis the XIV of Louisiana,” built the sugar plantation, “Le Petit Versailles,” in the 1830s. Gnarled 300-year-old oak trees line the 240-meter path leading to the Mississippi River. You can explore the mansion and the gardens, which make a nice spot for an afternoon picnic.

7. The Washington Monument
A trip to Washington, D.C., wouldn’t be complete without a visit to the Washington Monument. Made of white marble, granite and blue gneiss, the elegant obelisk proudly commemorates the first president of the USA, George Washington. Rising 169 meters from the centre of the National Mall, the monument is the tallest obelisk in the world. Tickets to the top are free and can be reserved in advance. There is an observation deck at 152 meters, with sweeping views of the city, and a museum at 149 meters.

8. Crater Lake
The centre-piece of Crater Lake National Park, located roughly 430 kilometres south of Portland, Oregon, Crater Lake is a picturesque landscape of crystal blue waters and sheer cliffs. Formed after a volcanic explosion about 7,700 years ago, it is one of the most pristine lakes in the world. At 592 meters deep, it is also the deepest lake in the USA and among the deepest in the world, fed almost entirely by snow and rain. You can take a boat tour across the lake’s placid waters or simply hike around the rim — either way you are in for a visual treat.

9. The Hollywood Sign
It’s hard to imagine Los Angeles, California, without the Hollywood sign. Erected in 1923 as an advertisement for a suburban housing development, the sign, which originally read “Hollywoodland,” was supposed to be temporary. However, it remains a permanent fixture of the Los Angeles hillside. As you explore the greatest entertainment hub in the USA, you’ll always see the sign in the distance, acting as a reminder of the area’s grand history and also the perfect background for a selfie. For stunning views of the sign, head to the Griffith Park Observatory.